Covid had a significant impact on the Media and Entertainment Industry the world over.  That affected India’s Industry as well, for companies like PVR.

Indian Film industry holds several titles, including the largest producer of films, approximately 1500 – 2000 per year compared to 700 in the USA and Canada. India is leading the film industry in terms of tickets sold. It is the 5th most significant box office market in terms of revenue. Despite this, the screen per capita is low, indicating an opportunity for expansion. What about the exhibition business?

In the film industry, the exhibition is a crucial component. After Covid, the OTTs have become prevalent, but before that, theatres were big – it will remain relevant in India though post-Covid. The reason is – for a lot of people, going to theatres and watching movies is still considered a luxury and an event.

PVR is one of the prominent players in the Media & Entertainment industry.

The multiplex industry is primarily an oligopoly Market with a 70% market controlled by the top 4 players.

PVR operates 846 screens in 176 cinemas in 71 cities in India and Sri Lanka,, with an aggregate seating capacity of approximately 1.82 lakhs seats.

We also need to understand the business dynamics of PVR. So let’s focus on that.. If we look at the avenues through which PVR cinemas can increase the revenues then there are only two ways.

However, there are certain limitations: How has Pandemicemic impacted PVR? What is the way forward for PVR? 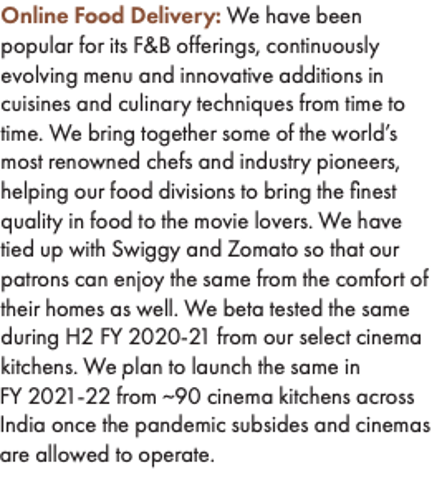 How will OTT and theatres survive together? Movie exhibition business is at a juncture where it has the infrastructure ready, demand is reasonably certain but the external factors are affecting the outcome of the business. In what direction it goes and how it innovates to be in the race, is going to be interesting. Watch out for this space.

Other Trending Posts in this Series – Spotify  |   HUL  |  Tesla Valuation